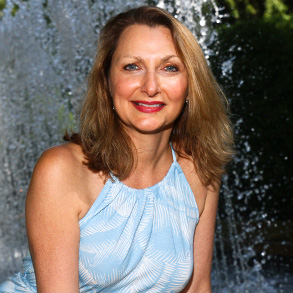 She needed twenty-five hours of travel by airplane and van to reach Ha Tinh, Vietnam.  The last seven hours made her carsick as the driver swerved around oxen, pigs, ducks, bicycles, and motorbikes on the road.
Before making that trip, though, she took a much more expansive spiritual journey via Unity on the North Shore. That journey enabled her to step out of her “story” and step into her life.
Then, Diane Testa was able to adopt a Vietnamese baby, Pham Thi Lam. With a new name, Mia Lam Testa, she now is a straight-A high school junior, a cheerleader who volunteers her time to help special-needs children.
“I came to Unity on the North Shore definitely feeling a sadness,” Diane says. It started when she was sixteen and learned that she would not be able to bear children.
That very night, Diane resolved to work hard to attain high success with no children. Which is exactly what she did. By her early thirties, she was promoted to director within a large company. She steadily earned more promotions, year after year.
Something was missing, though. She wanted to have a child and considered adoption. But her husband was totally opposed and they eventually divorced.

“Single and happy again,” Diane had “a beautiful condo” and a challenging, lucrative career. Still, she felt spiritually uncertain.
After some church-shopping, Diane discovered Unity. “My first sense was, yeah, this is it. What really stood out for me then was the concept of embracing affirmative prayer.”
And so, at the age of forty-one, “I finally admitted that all that I had in my life couldn’t fill the yearning; I wanted to love and nurture a child of my own. I surrounded myself with really positive people who supported my vision. I went to my heart’s center, because I had been very much in my head [in my work].”
To avoid nay-sayers, she kept her vision from her family and others who might warn that she was too old, too unmarried, too whatever.
On Valentine’s Day of 2002, she followed her heart and submitted adoption papers. After wrestling with the idea of being a single parent one evening, she had her only sleepless night.
She got up early, burdened with doubts. Looking outside, “There, perched on the back of a lounge chair on my balcony was a beautiful white dove.” The dove sat a half hour before flying “up into the sunlight.”
Through Unity practices, Diane had learned to “watch for signs and symbols in the world around me, to look for the Divine presence.”
She was ready, but she was told that the adoption process would take at least ten months. “I let go of expectations.” But then, after just five days, the agency said they had a baby for me. The Divine presence again!
More blessings came. Diane launched her own consulting firm. She has a new husband. She volunteers as a prayer chaplain.
“If it wasn’t for Unity I wouldn’t be here, wouldn’t have adopted Mia. Unity was the foundation of it all.”
Images:

However imperfectly we do it, now more than ever, each of us i

However imperfectly we do it, now more than ever, each of us i

On the eve of Memorial Day 2020, we contemplate the stories of four heroes for insight into how w